Tourism in Rimini for a complete holiday

Rimini is an open, hospital town on a human scales as well its wide seaside beach as its ancient heart: the historical Centre. Easily reachable in few minutes from Square Kennedy along Parco Renzi, it offers to visitors historical monuments of prominence, such as the ŌĆ£Arco di AugustoŌĆØ (Augustus Arch) of the year 27 B.C., still perfectly safe, despite its two thousand years of history, the ŌĆśPonte di TiberioŌĆÖ (Tiberius Bridge) of the I century A.C., the Amphitheatre built in the II century A.C. and the ŌĆśDomus del ChirurgoŌĆÖ (SurgeonŌĆÖs House), another Roman symbol. From Ancient Rome to the Renaissance the ŌĆ£Tempio MalatestianoŌĆØ (MalatestaŌĆÖs Temple) is one of the most significant example, as the ŌĆśCastello di SigismondoŌĆÖ (SigmundŌĆÖs Castle), symbol of the power of the Malatesta family. RiminiŌĆÖs history has the cinematographic imagination form ŌĆśGrand HotelŌĆÖ to the ŌĆśDistrict of San GiulianoŌĆÖ, places that were dear to the Italian director Federico Fellini, the ŌĆśMaestroŌĆÖ (Teacher), who was born here. When you leave the seaside there are other two treasures to discover:

The Marecchia and Conca Valley, which still preserve an amazing countryside with small villages and castles that custody a rich artistic heritage. .

The two valleys and the Riviera (seaside) are dominated by the three rocks of San Marino, symbol of the most ancient Republic in the world, which recalls every year thousands of visitors. For those who like bicycles, in Rimini there are about thirty kilometers of bicycle paths which connect the seaside to the town, and at the same time they represent a pleasant itinerary in the green of the parks.

For the most trained bikers, the territory is incredibly diversified, and in few kilometers you can go from the plain to the hill, up to the mountaintops of the Apennines. 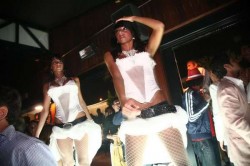 The towns of the coast never sleep by night! You can enjoy trendy bars, restaurants, dinner pubs: gastronomy with an undertone of lounge music and street bars. Along the road, you can find musical meeting points, where you can dance, drink and meet other people.

Finally, there are the discos, one of the myths of the RomagnaŌĆÖs Riviera, and the public dance-halls along the seaside. The star of the ballroom dancing never goes down, such as the star of the Latin American rhythms.